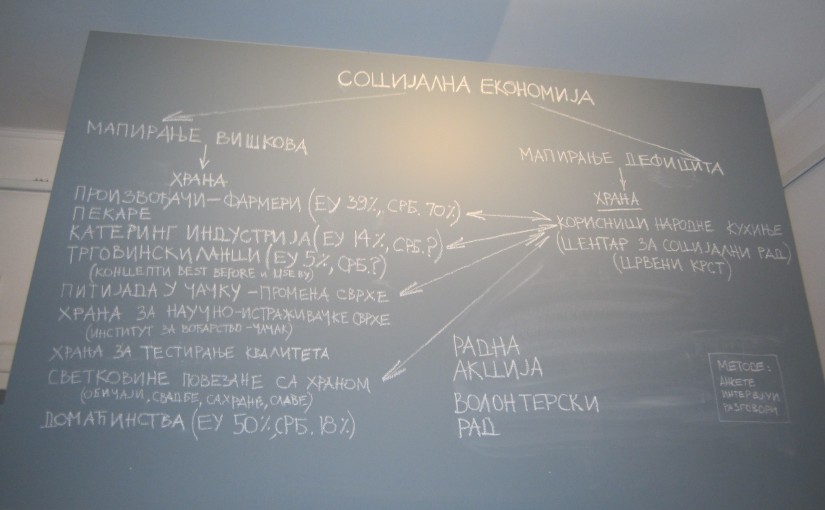 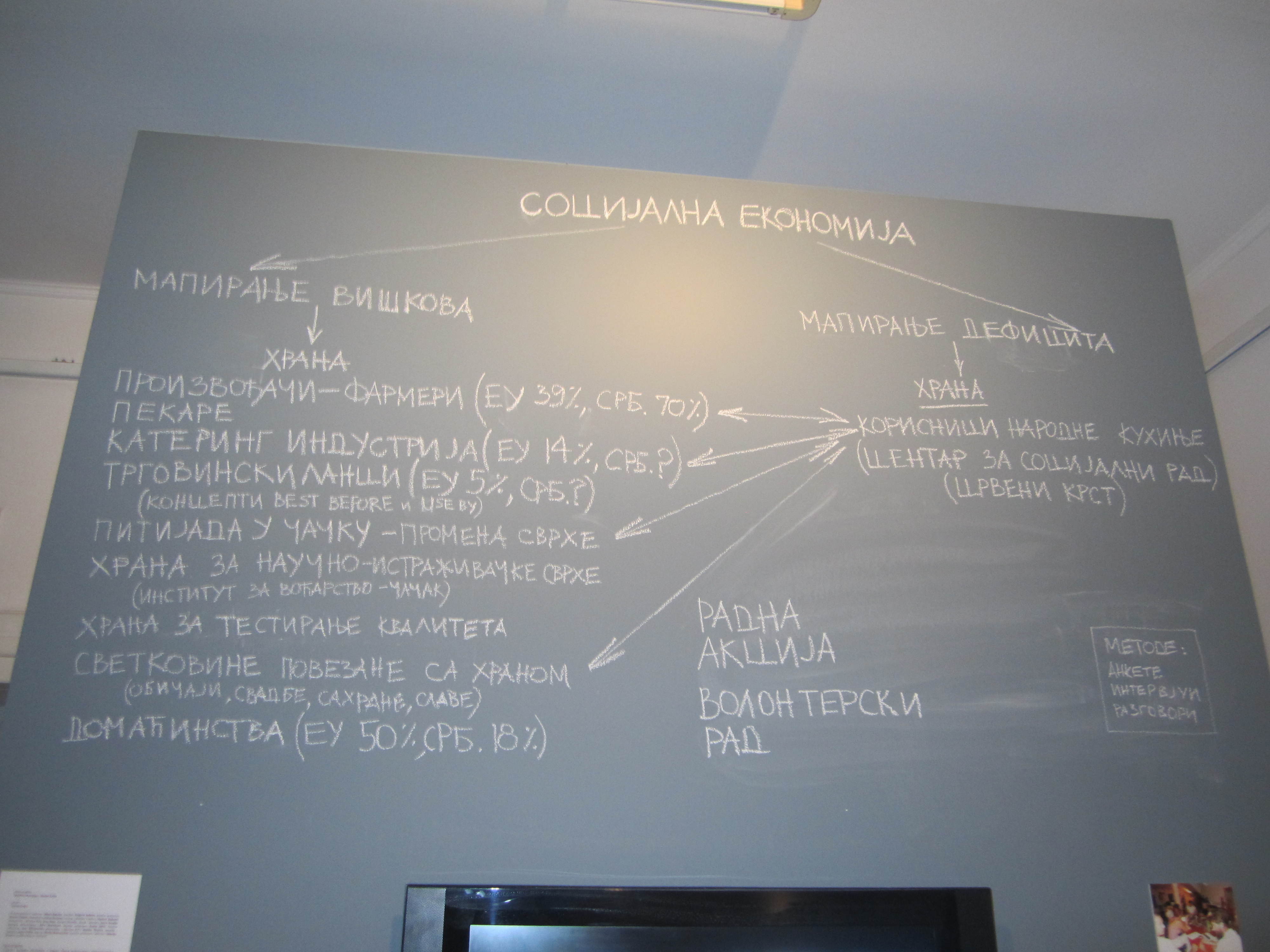 Project Social economy – Case: Čačak is an experimental attempt to establish a commodity exchange model that could exist within current economic processes in our country that are ever so determined and guided by the principles of liberal economy. The project implied organizing an open workshop with initiative to contemplate on all potentialities, as well as making practical attempts to execute some real self-sustainable systems of exchange which wouldn’t be determined by predominant logic that production or labor always results (or should strive to that) in extra value, thus profit. In that sense, only premise of this project was led by reverse logic to the one that predominant political economy demands- circulating from extra value (profit) to product, trying to get it to be free (in this case the aimed product was food). In this example, we considered as extra value of all of those products which, for some reason, can’t find their place on the market, while different ways of their exchange mostly aren’t provided, or are even forbidden by law.

The workshop gathered 15 participants of different profiles (economists, activists in culture and NGO sector, psychologists, traders, historians, persons with experience of working in food industry, persons working in media, etc.). Attending work meetings, we tried to map all the cracks and micro pores that emerge while constituting certain economic program or system, trying to find their logic and create a different one within, socially more considerable and self-sustainable practice that could work out in local context ( for example, providing certain endangered groups with food that otherwise gets thrown away). In short, the project was an attempt to overcome social and economic gap which has become a symptom of social reality of our country.

Some of the guidelines for developing this project were pointed in these directions:

1. Exploring and mapping different groups in society divided by class, that don’t communicate among themselves, clear understanding of that division and attempting to make a connection. In this aspect, case studies were related to: a) those who have access to extra value, but renounce it for some reason (producers and households that throw away produced food because they can’t place it on the market, farmers- protesters, catering-industry, trade-chains, negligent households) and; b) those who with current exchange conditions can’t procure any food for themselves (users of public kitchen). This segment of the project was most extensive, including fieldwork, talking to industry producers, interviewing citizens, etc.
2. Researching volume of impact that The Republic of Serbia, and countries of UN achieve through system of institutions and laws, limiting other, different models of (food) exchange beside those imposed by laws (for example, HASAP (HACCP) etc.)1 which all most directly cause throwing away hudge amounts of food and disenable possibility of their further distribution (differnt policy of concepts best before and use by etc.). This project also targeted irresponsibility of social institutions of the state for not showing any openness for this type of projects, explaining their position with laws and passing jurisdiction from one to another (Red cross, Public kitchen and Social work center).
3. Research of factory process and making an effort to find some kind of defect in production, a deformed product, something that would exist outside the strict production of product intended for market placement. In this aspect of workshop we tried to figure out destiny of products that are about to expire, those that could be used even after their expiration date (for example, pasta, honey, spices, etc.), and what happens with products on expiration day. This whole process is usually, at least in our country, pretty obscure. We managed to find out that trade chains have well worked out mechanism of sales actions for expiring products that could be interpreted as a form of a social policy, regardless of its primary cause. What doesn’t get sold, returns to their producers. But, we couldn’t find out what do they do with those products later on.2 Numerous texts imply the possibility of repacking these products and putting them back on the market, with much shorter expiration dates and tag use by (as opposed to best before for primary products).
4. Considering possibility of recreating food festivals that were popular in previous times (Piefest) and developing concepts of social satisfaction for participants, possibilities of donating food, developing social logic while distributing gathered food after the festival etc. We mapped this aspect of project as an open possibility.
5. An attempt to establish an independent system of social exchange that could survive outside existing institutions of the system. In this segment goal was to create an independent system of exchange from farmer to final consumer (who in this case wouldn’t be a user of Public kitchen). As a possibility to combine them, workshop tried to reinvent the idea of labor action. This concept of social activism was mostly popular in Yugoslav socialism, and studies show that its popularity didn’t fade out during years of the rise of self-governed socialism from first labor actions for reconstructing postwar country, up until decomposition of former Yugoslavia, in late 80’s. Also, this form of social participation was highly supported and approved by general public during its existence. Survey and research that we conducted show that even today there is much interest among people for this type of social participation. The idea was to mobilize those who needed food the most, for actions to collect food that otherwise decays on fields. However, an attempt to establish this type of exchange, that we consider to be an open possibility, was currently disabled due to a big drought in our country which destroyed most of our farmers’ yield for this year (up to 70%). Due to these unexpected circumstances, work group could not extract the other ‘extra value’ of that kind which could be used for new processes of exchange.3
All said, the result of the workshop is socially critical work, of documentory type, that marks all these ‘dead spots’ pointing out limits that represent most direct brakes in process of founding social initiative and (im)possibility for social existence in real economic conditions. 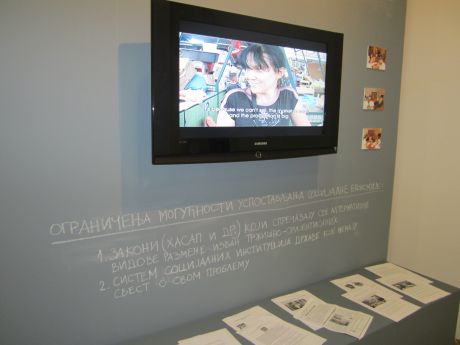 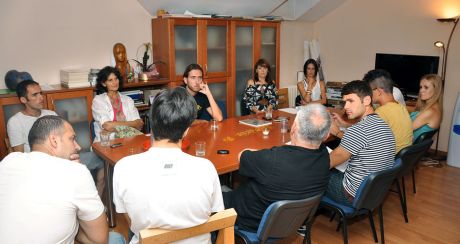 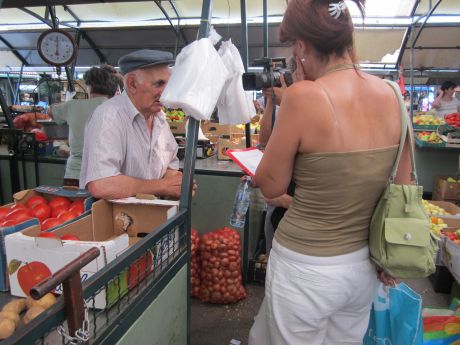 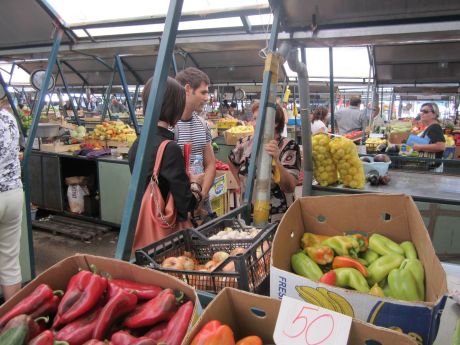 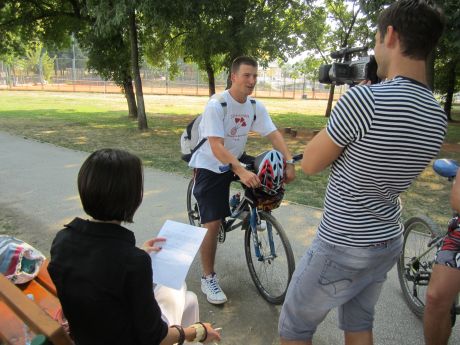 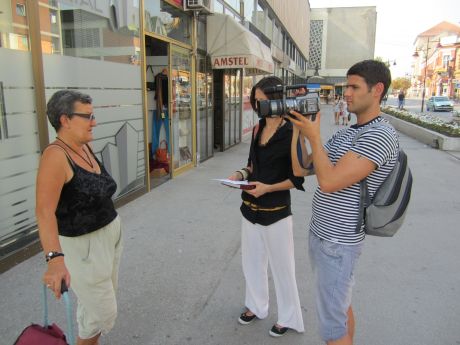 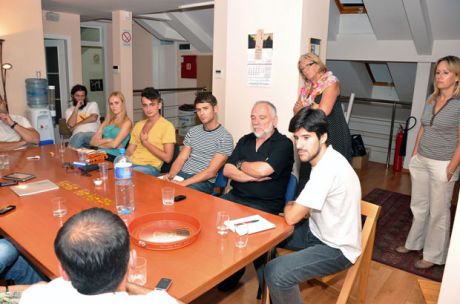