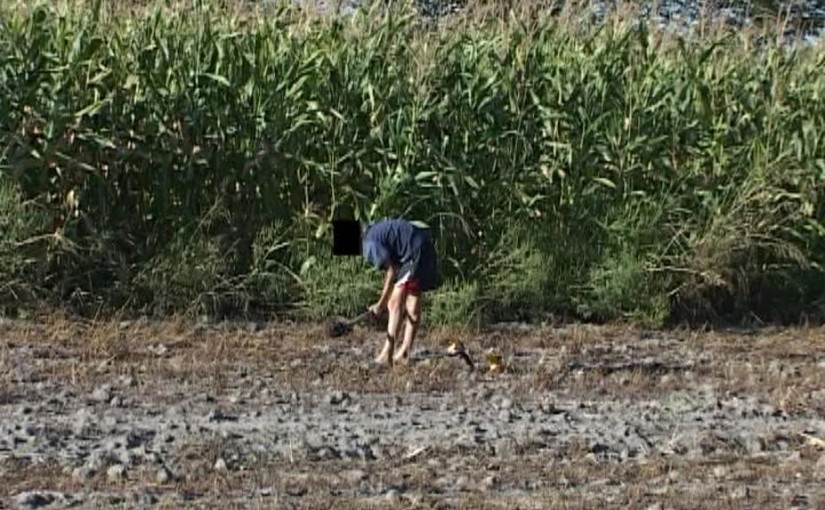 Fathers and the Forefathers is a video intervention based on the several days secret monitoring of the son of the famous Serbian politician Nenad Čanak done by artist personally. The video shows the child looking for Roman coins using a metal detector in the fields in Vojvodina (Province of Serbia) around Begeč (once a Roman city called Onagrinum). However, the only coins he finds are from the Yugoslav period.

Nenad Čanak’s son has been largely exploited by the political marketing of the party led by his father and appeared in its promotional videos1. Due to the use of children to promote a political party and its ideas, these videos provoked mixed reactions from the public, while the party, publicly recognized as the autonomist party of Vojvodina, defended itself by claiming that the use of a child was legitimate to show the party’s struggle “for heritage” and “for Vojvodina”.2
According to this context, the video is an intervention combining nationalist politics (fighting for territory) and interests of capital (exploitation of territory by private interests). Showing the successor of a Serbian politician literally trying to pull out money from Vojvodina’s soil, the video emphasizes the interdependence of these two dominant matrixes. The aim of the project is to show the manipulative mechanisms of representing political reality that is extremely present today – entire state and social assets and cultures flowing into private capital under the guise of patriotism. On the other hand, the introduction of the black square in the face of the child (a reference to Malevich, the end of representation in art, etc.) for reasons of ensuring the legality of the project, the project tend to suggests the non-representability of bourgeois in the context of civic-democratic.3